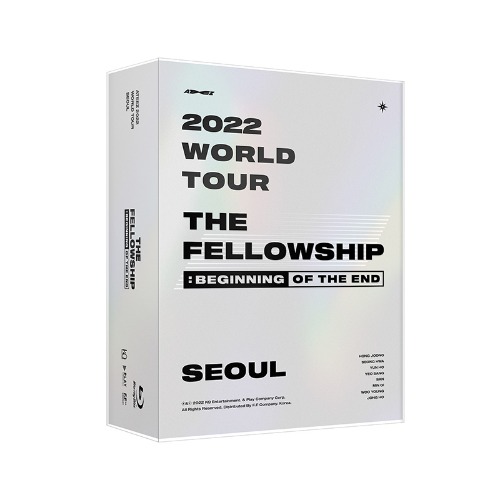 Product will be automatically added below when you select an option.

Discounted amount of your subtotal will appear when you place your orders.

ATEEZ THE FELLOWSHIP : BEGINNING OF THE END SEOUL
This is the first face-to-face concert in about 2 years where we worked together with ATINY in the same space!
I can feel that feeling again
ATEEZ THE FELLOWSHIP : BEGINNING OF THE END SEOUL Blu-ray Released!
After a long wait, the Olympic Hall was filled for 3 days on January 7-9, 2022.
ATEEZ THE FELLOWSHIP : BEGINNING OF THE END SEOUL Blu-ray
From the debut song 'Pirate King' to 'It's Fire', ATEEZ's intense sword choreography performances and live performances as well as
Even the first stage of 'ROCKY' and 'Take me Home'!
The live performances that were hot with the stages poured out with all their might and
MD&Poster, VCR on-site making, which seemed even more fun in preparation for a face-to-face concert after a long time,
From the practice room that we worked hard to prepare for the perfect performance, from rehearsal & D-DAY making
About 250 minutes of footage was packed in high-definition on two discs.
In addition, 24p photo books, digipacks, photo sets, photo cards, and random accordion postcards are also available.
By adding various configurations, the collection value has been increased with a rich composition that contains both video and photos.
Announcing the successful start of the 2022 world tour
ATEEZ THE FELLOWSHIP : BEGINNING OF THE END SEOUL Blu-ray
After pre-order on May 3, it will be officially released on July 1.
PRE-ORDER DATE: 2022. 05. 03 (Tue) 13:00 (KST) ~ *May be sold out early*
RELEASE DATE: 2022. 07. 01 (Fri)
[SPEC]
1. SLEEVE & OUTBOX
- Size: 152x202x44mm
2. DIGIPACK
- Size: 140x189mm
3. 2 DISCS
- ASPECT: 1080i 1.78:1 WIDE SCREEN COLOR
- AUDIO: KOREAN DTS-HD MASTER AUDIO 2.0 (48KHZ / 24BIT)
- SUBTITLES: KOREAN, ENGLISH, CHINESE
- REGION CODE: ALL FREE(A,B,C)
- DURATION: DISC 1 APPROX 135 MINS / DISC 2 APPROX 115 MINS
4. PHOTOBOOK
- Size: 140x189mm / 24P
5. PHOTO SET
- Size: 150x100mm / 4EA 1SET
6. PHOTOCARD
- Size: 86x54mm / 1EA
7. ACCORDION POSTCARD
- Size: 120x170mm / RANDOM 1EA
[CONTENTS]
DISC 01 : ATEEZ 2022 WORLD TOUR [THE FELLOWSHIP : BEGINNING OF THE END] SEOUL
PART 01
- WONDERLAND (Symphony No.9 “From The Wonderland”)
- Pirate King (Overload Mix)
- Say My Name
- Treasure + Precious
- UTOPIA
- Better (Korean Ver.)
- Still Here (Korean Ver.)
- WAVE
- INCEPTION
- Deja Vu
- Take Me Home
- Desire + HALA HALA
- Answer
- Declaration + Fireplay (I'm The One)
- Good Lil Boy + The Leaders + Dance (TO THE BEAT)
- THANXX
- ROCKY
- Intro + Fashion (The Real) (Heung:興 Ver.)
DISC 02 : ATEEZ 2022 WORLD TOUR [THE FELLOWSHIP : BEGINNING OF THE END] SEOUL
PART 02
- Eternal Sunshine
- Dancing Like Butterfly Wings
- Star 1117
- Night flight (Turbulence)
MAKING FILM
- MD&POSTER MAKING FILM
- VCR MAKING FILM
- PRACTICE MAKING FILM
- REHEARSAL&D-DAY MAKING FILM
※ Size and composition are subject to change depending on the circumstances of the manufacturer. Please understand.
※ SLEEVE is an anti-impact product to protect the product, and there may be slight scratches and discoloration.

1) This payment method is provided by Eximbay and is bileed as eximbay.com
2) Note: Please note that the billing descriptor will be listed as EXIMBAY.COM

In the case of pre-order products, there may be order cancellation or additional payment
for shipping costs due to changes in delivery method after the actual product is produced.

2. Requirements:
Please take into consideration that we only accept qualifying returns but not exchanges. Refunds are issued once the returned products clear our inspection.

1) An item is eligible for cancellation if:
-you posted a Return request within 24 hours of payment and your order is still under “Pending” status (if your order is under “Preparing Shipment” status, please contact our customer service center) or
-the order is delayed for more than 10 days since payment and you have not received any notification regarding the delay; or
-the ordered item is out of stock.

(1) Post a return request on our Return forum within three days of receipt. You are required to attach the photos of the received product(s) and include the item code, the order number, and the reason for the return.
(2) A customer service representative will be in contact to assist you by email or phone.
(3) Items returned must be in their original condition, which includes tags and any packaging. Also, you need to include a note of your order number, name, and user ID.

*Please be advised that returns are accepted ONLY IF you followed the instructions above and your return request has been approved by our staff. Returns that are shipped to us without any prior consent are not accepted.
*Please note that EVEN the defective/incorrect item(s) must be returned with all of the tags and labels intact. The item(s) must be sent in their original packaging and unworn.
*Please include all contents of the original package and free gifts (if applicable) in your return packaging.
* Shipping fee for any return caused by our fault will be paid by the company. However, if EMS’ cash on delivery is not possible then you can scan the return receipt and either mail it with the item to return or post an image of it on the forum. The shipping fee will be refunded once the returned item has arrived.

-you are returning the items just because you changed your mind (on size, color, etc.)
-you are returning shoes, bags, or any other accessories
-the products are damaged due to your mishandling
-your return request is not approved by our staff

The following items are not considered defective:

4) If there is a missing item from your order:

*Contact our customer service center by phone or by forum (if you cannot reach us by phone) within 1 day of delivery.
*Please keep all contents of the original package including packaging material (boxes, plastic bags etc.) with you until you are instructed otherwise.

Please note that we may not be able to process the refund for your missing item if you lose or damage any packaging material.

There are no posts to show

Write a Review See All

There are no posts to show

This window will automatically close when payment is processed.
Do not close this window until processing completes.